Aligned with 2020 theme, “I am Generation Equality: Realizing Women’s Rights”, the Report issues call to action to achieve gender equality and justice for this generation, 25 years after the Beijing Platform for Action.

Ahead of International Women’s Day on 8 March, UN Women today launched its report, “Women´s Rights in Review 25 years after Beijing[1]”, a comprehensive stock-take on the implementation of the Beijing Platform for Action, which remains the most comprehensive agenda for gender equality ever agreed.

The report finds that progress towards gender equality is faltering and hard-won advances are being reversed. Rampant inequality, the climate emergency, conflict and the alarming rise of exclusionary politics all threaten future progress towards gender equality. The report flags the lack of effective action to boost women’s representation at the tables of power and warns that the vision of the Beijing Platform for Action will never be realized if the most excluded women and girls are not acknowledged and prioritized.

UN Women’s Executive Director Phumzile Mlambo-Ngcuka said: “The review of women’s rights shows that, despite some progress, no country has achieved gender equality. Equality isn’t just one quarter of the seats at the tables of power. But that’s the current reality of women’s representation, across the board. Men are 75 per cent of parliamentarians, hold 73 per cent of managerial positions, are 70 per cent of climate negotiators and almost all of the peacemakers. This is not an inclusive and equal world and we need to take action now to create one that does not discriminate against women. Only half is an equal share and only equal is enough”.

Despite unprecedented global challenges, the report also proves that positive change is possible, as shown by the success of women’s collective action to obtain accountability for crimes against them and the flourishing of feminist movements across the world. The report showcases successful initiatives in scaling up public services to meet women’s rights, from increasing access to contraception and childcare, to reducing domestic violence and increasing women’s participation in politics and peacebuilding.

The report is based on the UN Secretary-General’s Report, which is the most comprehensive and participatory stock-taking exercise on women’s rights ever undertaken, with contributions from 170 Member States.

The report reveals that there have been advances in women’s and girls’ rights since the adoption of the Beijing Platform for Action. There are now more girls in school than ever before, fewer women are dying in childbirth and the proportion of women in parliaments has doubled across the world. Over the past decade, 131 countries have passed laws to support women’s equality.

But progress has been far too slow and uneven:

UN Women Executive Director Phumzile Mlambo-Ngcuka said: “2020 presents an unprecedented opportunity to turn things around for current and future generations of women and girls. To accelerate progress during the UN Decade of Action, UN Women has initiated six Action Coalitions that will mobilize governments, civil society, UN agencies, and the private sector to deliver game-changing results to advance equality for women and girls.”

To catalyze systemic and lasting change the report points to the need to vastly increase financing for gender equality, to harness the potential of technology and innovation and ensure that development is inclusive of women and girls who face multiple forms of discrimination.

2020: A milestone year for gender equality 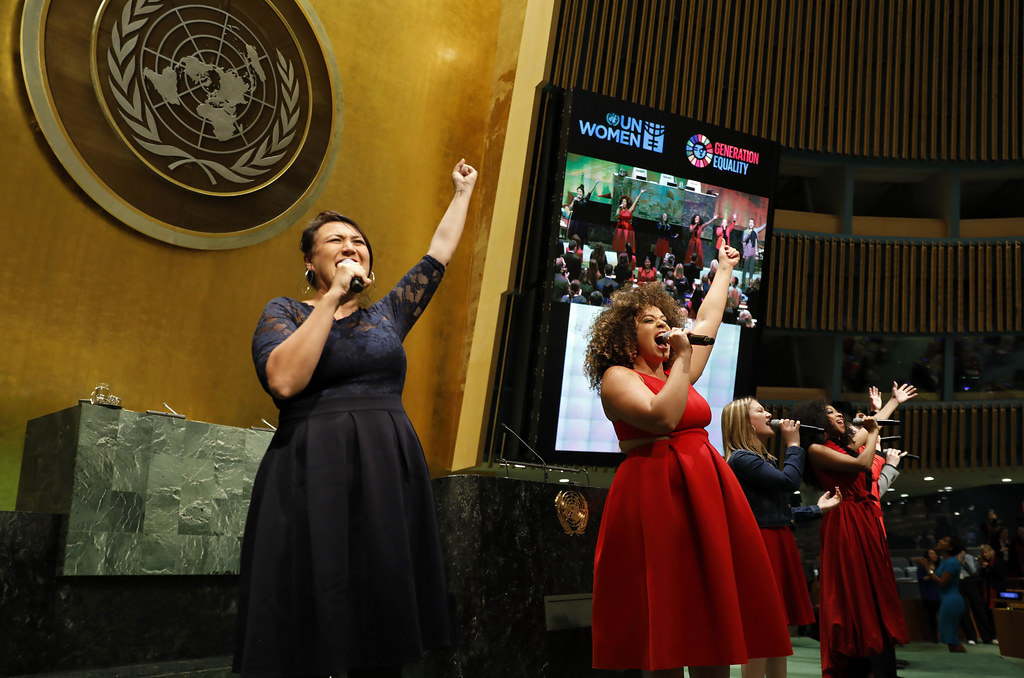 The United Nations Observance of International Women’s Day 2020[3] will take place at the General Assembly Hall of the United Nations Secretariat in New York on Friday, 6 March 2020. It will bring together the next generations of women and girl leaders and gender equality activists with the women’s rights advocates and visionaries who were instrumental in creating the Beijing Platform for Action more than two decades ago.

The event will celebrate changemakers of all ages and genders and discuss how they can collectively tackle the unfinished business of empowering all women and girls in the years to come. The Observance will see the participation of senior-most representatives of the United Nations system, including the Finnish Prime Minister Sanna Marin, UN Secretary-General António Guterres, UN Women Executive Director Phumzile Mlambo-Ngcuka, and an inter-generational dialogue with gender equality activists from ages 11 to 75. The event will also feature musical performances by UNICEF Goodwill Ambassador and Grammy Awards winner Ms. Angelique Kidjo, also a speaker at the event, The Pihcintu Multicultural Choru and Broadway Singers.

Hundreds of events and initiatives will mobilize people to demand progress on closing the gender gap in countries worldwide. 90 stock exchanges around the world will raise awareness of the pivotal role that the private sector can play in advancing women’s empowerment by hosting a bell ringing ceremony. Film screenings in the UN Women Oasis centres at the Za’atari and Azraq refugee camps in Jordan will be organized engaging refugee women and girls but also host communities.

A global comic and cartoon competition on Beijing+25 and Generation Equality will be launched in partnership with Belgium, France, Mexico and the European Commission, calling on the younger generation to picture how gender equality looks like to them. In Zimbabwe, the Head of a faith group will issue a message on gender equality that will be disseminated through the churches; in Thailand a “Women in Focus” photo exhibition will be launched in partnership with French Embassy and Alliance Francaise, and in Mexico a marathon for gender equality will be organized.

In Brussels, the European Union also launched #WithHer, a creative engagement campaign from the Spotlight Initiative to promote the elimination of violence against women and girls, with the presence of Regional UN Women Ambassador for Africa, Jaha Dukureh.

Join the online conversation on Twitter using the hashtags #IWD2020, #internationalwomensday, #GenerationEquality and by following @UN_Women[4].

Acquire this Domain
You can acquire this site’s domain name! We have nurtured its online marketing value by systematically curating this site by the domain’s relevant keywords. Explore our content network – you can advertise on each or rent vs. buy the domain. [email protected] | Skype: TLDtraders | +1 (475) BUY-NAME (289 – 6263). Thousands search by this site’s exact keyword domain name! Most are sent here because search engines often love the keyword. This domain can be your 24/7 lead generator! If you own it, you could capture a large amount of online traffic for your niche. Stop wasting money on ads. Instead, buy this domain to gain a long-term marketing asset. If you can’t afford to buy then you can rent the domain.

About Us
We are Internet Investors, Developers, and Franchisers – operating a content network of several thousand sites while federating 100+ eCommerce and SaaS startups. With our proprietary “inverted incubation” model, we leverage a portfolio of $100M in valued domains to impact online trends, traffic, and transactions. We use robotic process automation, machine learning, and other proprietary approaches to power our content network. Contact us to learn how we can help you with your online marketing and/or site maintenance.

The requested URL's length exceeds the capacity limit for this server.

The requested URL's length exceeds the capacity limit for this server.

This website uses cookies to improve your experience while you navigate through the website. Out of these cookies, the cookies that are categorized as necessary are stored on your browser as they are essential for the working of basic functionalities of the website. We also use third-party cookies that help us analyze and understand how you use this website. These cookies will be stored in your browser only with your consent. You also have the option to opt-out of these cookies. But opting out of some of these cookies may have an effect on your browsing experience.
Necessary Always Enabled
Necessary cookies are absolutely essential for the website to function properly. This category only includes cookies that ensures basic functionalities and security features of the website. These cookies do not store any personal information.
Non-necessary
Any cookies that may not be particularly necessary for the website to function and is used specifically to collect user personal data via analytics, ads, other embedded contents are termed as non-necessary cookies. It is mandatory to procure user consent prior to running these cookies on your website.
SAVE & ACCEPT